You are here: Home › Florida › Voters to FL House: ‘Healthcare Expansion is an Emergency’

Just one day after the Florida House adjourned without passing a budget or addressing the serious healthcare coverage gap, voters took action in front of Orlando Regional Medical Center to protest the failure of the state legislature and local Republicans. The Orange County Democratic Disability Caucus led the way this morning in front on the Emergency Room entrance, declaring to legislators that “healthcare expansion is an emergency.”

“We are standing here today with a unified voice to tell the Senate not to back down,” said Tiffany Namey, President of the Orange County Democratic Disability Caucus. “To the Governor and Speaker Crisafulli and all the politicians in Tallahassee, start putting the lives of your constituents ahead of your political agendas and expand healthcare coverage now.”

The fact state representatives abandoned their sole duty of passing a budget is shocking, but the reality of Florida’s healthcare crisis is even more appalling. In Orange County alone, an estimated 252,402 residents are uninsured. That’s right, more than one-quarter million residents are still uninsured in our county.

Yet still, 80 Republicans continue to deny 800,000 Floridians access to health care by refusing to accept Medicaid expansion money from the federal government. The OCDDC is calling on the politicians in Tallahassee to pass comprehensive healthcare reform for Florida’s citizens now, not later. 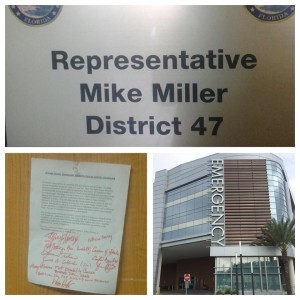 After leaving ORMC, the group marched to Representative Mike Miller’s office to demand answers about the House’s walkout. But even though Republicans bailed on Tallahassee, it appears the legislators are missing in action locally as well.

“The Orange County Democratic Disability Caucus along with a dozen concerned residents are here to ask why a bill to expand access to healthcare in Florida was not proposed this session,” posted Wes Hodge, Vice President of Orange County Democratic Disability Caucus. “Shocking that the door is locked, and nobody is here working!”

“It is incredible that the Florida House would leave our kids and families in need without funding or protection,” said former House Member Linda Stewart.

Other groups also chimed in on the adjournment by the Florida House of Representatives, lambasting Republicans and calling them out for quitting on voters.

“Lawmakers were elected to serve, not to walk away when things get hard,” read a statement from Florida CHAIN, a statewide consumer health advocacy organization dedicated to promoting access to affordable, quality healthcare. “Like many, we were absolutely shocked and dismayed to learn of the House leaders’ callous decision to sine die early while failing to close the coverage gap.” The group added, “this puts an enormous burden on our already struggling safety net hospitals and jeopardizes jobs at hospitals, which are a critical economic engine for many Florida counties.”

The League of Women Voters of Florida also called out the House leadership. “We are shocked and deeply disappointed that the House leaders, while still on the taxpayers’ payroll, chose to abandon their post with critical legislation still to be addressed. In the private sector, this would be grounds for dismissal,” said Deirdre Macnab, President of LWVF. “We urge Florida citizens to track down House Speaker Crisafulli and their representative and tell them to get back to work. Our state deserves better.” 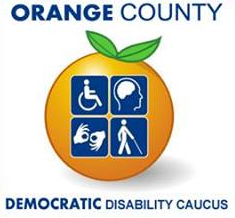 The Rainbow Democrats also joined today’s action. The Orange County Democratic Disability Caucus’s role is to empower residents living with disabilities, visible and invisible, their loved ones and care takers to have a voice in legislation and policies and to promote candidates that together will lead to healthier lives and strengthen the Constitutional ideal that all Americans are entitled to life, liberty and the pursuit of happiness. To find out more about the Orange County Democratic Disability Caucus please click here.