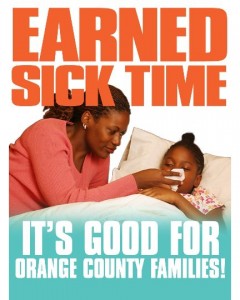 The issue of Earned Sick Days just got real in Orange County – and set a little local history at the same time, maybe. It’s already been quite the campaign and process to secure the 43,605 necessary petitions from registered County voters, but leaders of the coalition are signaling they are headed to the ballot. Months of hard work in the hot summer sun covering public events, public forums, and meetings; building a coalition of community organizations, non-profits, local small businesses and regular citizens; and of course, going door-to-door to get the word out that voters can take steps to protect workers when our elected officials simply will not. Signatures were finally verified today by the Supervisor of Elections office.

This is the first citizen petition initiative to qualify for the ballot in Orange County. In addition to the total number of needed signatures, the group had to collect 7% of all registered voters from each County Commission district, as stated by law. But will it make the ballot this November? The Board of County Commissioners will ultimately make the decision regarding balloting.

Adding complications to the effort in the final days, there are still questions surrounding timing of turning in the petitions. The Supervisor of Elections office has been busy all week with Florida’s primary elections and certifying the results. This resulted in a delay in verification of the petitions the coalition turned in on Monday. The process must now go from the Supervisor of Elections to the County Commission. After proper public notice, the Commission must schedule a hearing and agenda this initiative to direct it to the ballot within 30 days. However, it is unsure if there is time to make the November ballot as Supervisor Bill Cowles intended on printing the ballots August 21, which likely will no longer happen. Mayor Jacobs also recently clarified her position and signaled the best scenario could simply be a Charter Amendment to change the process in the future. [Update: County Commission will set a hearing on this matter for Sept. 11th]

But what does this paid sick days measure really mean for our families? Here’s a very short run-down of some of the benefits Orlando workers could enjoy.

First, no one in our county will be allowed to be fired for being sick. While this sounds like a no-brainer, it is not guaranteed currently. If you are sick – or worse, your child is sick – you could potentially lose your job for choosing health and family first. That immediately is corrected. For businesses over 15 employees, they will have to provide 7 days of earned sick time, while businesses smaller than 15, they simply could not penalize employees who take unpaid time off.

According to the National Partnership for Women and Families – a coalition supporting Paid Sick Days nationwide – more than a third of women don’t have access to paid sick days, nearly 40 percent of African-Americans have no paid sick day, and nearly half of Latinos have no paid sick days. Bigger picture benefits include saving the community in overall health care costs and the spread of disease in nursing homes and schools. But more close to home, paid sick days will provide needed protection to Orange County’s most exploited workers.

Orange County’s working families deserve a solution. For too long our elected leadership has been focused on the bottom line for developers, major spending projects and appeasing the powers that be in Tallahassee. Now, here at home, the people will have the chance to create their own ordinance that puts people first. Let the Chamber of Commerce begin their multi-million dollar push against the will of the people.

Now, with nearly 50,000 valid petitions, it seems very difficult that either Cowles or Jacobs will want to be seen as the roadblock in a citizen initiative process. Or will process get the best of the coalition that was just a little late in turning in enough petitions? This fight is far from over.