You are here: Home › City of Orlando › Reality Check: There’s No Telling What Dyer Will Throw At Residents 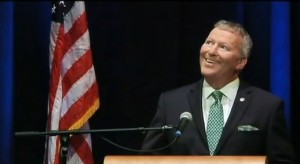 Dyer likes to talk a lot of game, and he is the king of hype and spin locally. But his words and actions do not always line up, and sadly, it’s often residents, taxpayers and small businesses that end up paying the price. Mayor Dyer does not define “they” in his campaign email and currently no other candidate has filed to run against him after Dyer convinced the City Council to hold a snap election in just five months (instead of April 2016). Dyer’s political power play will also result in low turnout and little public engagement, just as the incumbents prefer. The blatant and bold election date move is just the latest trick Dyer has pulled on the community – and especially the youth who will lose their right to vote.

Let’s take a look at just a few of the other major surprises Dyer has recently thrown at residents and voters despite all his campaign promises and forced smiles at City Council meetings or press conferences. 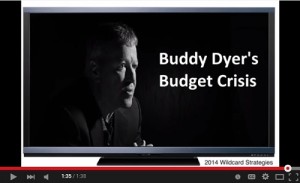 Despite years of Dyer telling residents he had the city budget under control with non-stop redevelopment and spending, Dyer was finally forced to admit his budget crisis last year. Residents then learned late last year part of the financial reality in Orlando when they were slapped with a 17% property tax increase to make up for Dyer’s mess. In addition to the shocking property tax hike, Dyer also ordered millions of dollars in cuts to public services and increased fees to help close the $52 million budget gap.

It appears even top city employees never know what Mayor Dyer will throw at them next either. Public records helped tell a piece of the real story inside City Hall as departments faced Dyer’s substantial budget cuts. At the time, City Clerk Alana Brenner wrote in emails to Dyer’s top staff saying, “So you are now saying we need to cut those amounts from our budgets for those two offices? Really?? That’s two staff people…or we don’t print the legal ads for ordinances.” Brenner is no longer City Clerk after stepping down at the beginning of the month. Maybe she had enough?

Just last week, Dyer surprised top-level city staff including the assistant budget director when he announced the soccer stadium would now be 100% privately funded and owned. Top staff who were meeting on other matters at the time of the announcement were caught off guard and reports from the room indicate they were unaware of the change in plans. While the new stadium change is just the latest example of deals made behind closed doors by this administration, it appears Dyer thinks he can force through whatever he wants outside of sunshine, open meetings and a public process. But if even top City Hall staff are out of the loop on major decisions before they are announced, what does this say about Dyer’s vision other than it is fickle and ever-changing?

The mayor also does not discuss the huge amount of debt the City of Orlando is facing because Dyer is directly responsible for creating it with his “vision.” To get some of his major spending projects off the ground, like downtown parking garages and the Venues, Dyer has orchestrated more than $115.7 million of debt through loans from an entity called the Sunshine State Governmental Financing Commission, using city assets as leverage and putting local taxpayers on the hook.

While none of the City Commissioners talk about the debt under orders from the mayor, Dyer’s debt is coming due and complicating the budget woes. According to the SSGFC Combined Payments Schedule, obtained from public records, Dyer’s debt is coming due at a high price tag for local taxpayers and residents. The debt payments just started in 2015 but Orlando taxpayers are on the hook for Dyer’s debt payments for the next 20 years. In the fiscal year ending September 2015, the City of Orlando owed $1,8 million on Dyer’s debt. In just five years, the City of Orlando will owe $9 million as the yearly payment on the debt. How does the Mayor intend to make these payments and increase quality of life for residents given the budget crunch?

Making it worse, residents may not get a full grasp on the real cost of it all as Dyer took loans with variable rate interest. For instance, the same 2015 payment totaling $1.8 million did not include an additional $2,314,800 in interest payments on the four current outstanding loans. According to city records, the total debt service payments to the SSGFC was estimated at $4.1 million in 2015.

Even the City’s own public employees have to wonder what will come next from Mayor Dyer. The last wave of negotiations for pay and benefits turned hostile with the mayor before employees were only offered a 2% increase per year for three years. The Service Employees International Union (SEIU) even called out Mayor Dyer in 2013 when the City Council almost increased the Mayor’s pay by 21% to nearly $200,000/year. Once again, the Mayor was telling union workers there was a budget deficit and he could not increase benefits or wages, while at the same time Dyer was trying to increase his own pay exponentially.

New negotiations will likely take place early next year for city employees, but it’s unknown what will happen given the current circumstances. SEIU – Florida Public Services Union (FPSU), which organizes city employees, also recently called on City Hall to increase pay for Emergency Communications Specialists, as called for in the Collective Bargaining Agreement. The calls for increased wages follow ongoing struggles with recruitment and retention. No response yet from Mayor Dyer.

The reality is neither residents nor city employees can trust the words that come from Buddy Dyer’s mouth.

Dyer promised affordable housing in Parramore with the Carver Park project, and even spent $1 million with nothing in return. According to WFTV Channel 9 News, the City of Orlando spent nearly $33 million on site remediation and infrastructure, but the homes originally planned were never built. Another affordable housing project, Parramore Village, resulted in $3 million wasted on failed plans. WFTV investigated tens of millions unaccounted-for Orlando housing funds recently and still have no answers from officials.

Last summer, Dyer became embroiled in another scandal with the Black Business Investment Fund (BBIF). Questions surrounded nearly $1 million public tax dollars that were supposed to rebuild Parramore’s historic Carver Theatre. Even though the money disappeared with nothing to show for it, Dyer purchased the same Parramore property back from BBIF for three-times the rate the city sold it for in 2005. The historic Carver Theatre will never be rebuilt, as this is the planned site for the MLS stadium. Another broken promise.

Even Dyer’s own neighbors in the College Park community felt the wrath of the Dyer’s Council with the Princeton development. Rethink the Princeton has been leading the way in their fight against the City’s vote and the group is making progress in their fight to stop the major apartment complex. The issue is far from settled.

Another recent cruel reminder of Dyer’s way of business was exposed in the year-long Tinker Field drama. The Orange County Commission claimed they never knew Dyer’s ultimate plan to demolish the historic site despite entering an Interlocal Agreement with the City of Orlando. Orange County Mayor Teresa Jacobs was misled directly by Mayor Dyer and Orlando Venues Director Allen Johnson earlier this year in official memos. Dyer obviously believes he can act this way to anyone making his future actions, deals, or change in plans unpredictable.

The list could go on and on. With a track record like this one thing is sure, there’s no telling what Dyer will throw at residents.

2 Responses to "Reality Check: There’s No Telling What Dyer Will Throw At Residents"