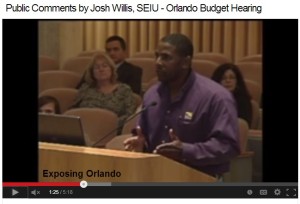 At the recent City of Orlando Budget Hearing, public employees spoke out about controversial actions being made by Mayor Buddy Dyer and the Orlando City Council. They also explained how Mayor Dyer and his administration told them there was a $12 million deficit in the budget.

Willis also explained how the public employees are not happy with what happened during negotiations compared to what happened at the Budget Hearing. “My question is: where is bargaining in good faith?” added Willis.

Another city employee, Anthony Owens, also spoke out on the issue.

Orlando does not broadcast public comments nor do they put them online, so watch for yourself.

My own public comments supporting the city employees can be viewed here.