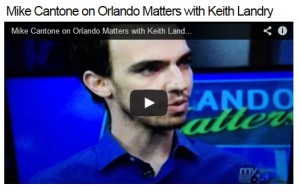 On October 12, Keith Landry of My Fox Orlando took on the soccer stadium proposal on Orlando Matters featuring Orange County Mayor Teresa Jacobs and Orlando Mayor Buddy Dyer — and me rebutting some of their claims. In the video clip, I take on the flawed economic arguments being made by both mayors directly, in addition to reminding the community about the ongoing gentrification of Parramore.

When asked if there was a “plan B” in case the County rejects funding for the stadium, Dyer said they were currently on “plan E” and he did not know if there were many other options. He also admitted that soccer games are too violent and dangerous in Brazil and so Brazilians would fly to Orlando so they could have a “family friendly” option to watch soccer. That sounds a bit ridiculous – and perhaps why the Mayors have no evidence or economic reports to back up their baseless claims. It also doesn’t sound like those violent or dangerous soccer fans are the people we want to invite or lure to Orlando. Dyer must also be forgetting the Brazilians against soccer spending are also rioting in the streets right now.