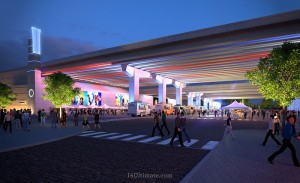 Renderings of downtown Orlando under the I-4 bridge after construction, without any parking options. (FDOT)

With the release of the DTOutlook plan from Mayor Buddy Dyer’s task force, City Hall outlined nearly half a billion dollars in additional transformations for downtown. The vision will drastically change much of downtown once again as the city attempts to resurrect its core. The report offered a glimpse of downtown Orlando by the numbers right now, but the plan is to continue changing the demographics and economics as well as the look and feel of downtown to fit Dyer’s image of a future Orlando – and downtown parking is one major piece of the moving puzzle. Looking ahead, the Dyer administration wants to “guide people to parking garages” and “eliminate as much as possible vast amounts of surface parking lots.”

City officials also admit parking is “our number one complaint about people not wanting to come downtown.”

In addition to the DTOutlook plan, the I-4 Ultimate construction project is also bringing changes to downtown Orlando. Specifically connected to parking, downtown is going to lose the parking options under the I-4 bridge during construction – and after. There are currently no plans to return or replace the parking spaces, and the new vision is to create a “bridge district” connected to the new proposed Amway Center entertainment complex and Church Street corridor.

Rendering from City of Orlando’s DTOutlook vision plan of the I-4 bridge without parking options post-transformation.

According to Florida Department of Transportation officials, only 25% of available parking will remain open under the I-4 bridge during construction according to the contract. It is still unknown when the parking will close as work begins, but the I-4 Ultimate project will also redesign portions of Hughey Ave. and Garland Ave. FDOT officials were quiet about any parking spaces being open after construction is complete.

That’s because these parking spots will never return to the area. The City and Orlando Magic envision an entertainment complex spanning the new “bridge district,” focusing on heavy pedestrian activity. The new vision does not call for parking spaces, the DTOutlook plan states “this area will become a future community focal point” and adds “the vision includes food and retail space, creative space, open space, and entertainment space.”

The new vision even suggests “artificial turf could be used to construct sports fields under I-4, either on a temporary or permanent basis.” So, no parking spots, but more demand for downtown parking. This all fits in with the Dyer administration’s policy and vision.

Project DTO members discussed downtown parking and city policy during recent meetings before submitting the final outlook plan to City Council. During one parking discussion from the March 2015 DTO meeting, the city explained the plan to “guide people to parking garages” and “eliminate as much as possible vast amounts of surface parking lots.”

During the same conversation, Executive Director of the Downtown Development Board Thomas Chatmon talked about parking being Orlando’s “number one complaint about people not wanting to come downtown” and described “overcoming that attitude of being sort of turned off by centralized parking.” He quickly added “But it’s absolutely the way to go.”

Audio: “Our Number One Complaint About People Not Wanting To Come Downtown”

The conversation got heated when business leaders jumped in to attack city policy in regards to construction of parking garages. Mr. Chatmon was asked directly by Project DTO members the reasons behind the city not allowing business or developers to build stand-alone parking garages. “I can speculate but I’d rather not,” Mr. Chatmon responded.

But business leaders on the committee declared the problem is caused because “the city, even to this day, thinks they are in the parking business and they restricted it because they were trying to do that.” The Project DTO members, appointed by Mayor Dyer himself, expressed concern about city parking policy and suggested “rates downtown are artificially messed with” and complained about the “limited amount of city-controlled inventory” in terms of parking that other cities do not have. The exchange can be heard here:

City officials expressed there are no plan to change parking policies. City policy is clear on principal use parking, or stand-alone parking not associated with a project, in downtown Orlando. The business and developer complaints could be another reason why so much of the downtown construction includes levels of parking built into the projects. For instance, the proposed Tremont Realty development at Church Street Station just changed its plans and now wants a 10-story parking garage, along with a hotel on only 8 stories and office space on 7 stories. The old plan was for a 13-story hotel and fewer parking spaces. 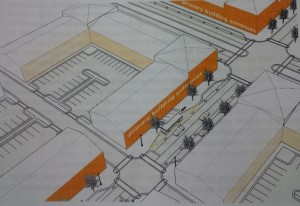 Where there are no parking garages, the City aims to locate surface parking options in the rears of buildings moving forward, according to the DTOutlook plan.

To help combat all of the parking changes, the City of Orlando did recently announce the ParkMe app to help visitors to downtown find a parking spot. But the focus moving forward will be on a city-controlled centralized parking garage system, with limited on-street parking for high-turnover spaces.