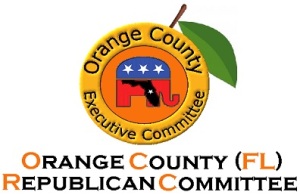 Orange County Republican Party Chair Lew Oliver outlined his election strategy and top targets ahead of November in a forwarded email, originally sent to party members but now made public, under the subject “Who Wants Some Paid Work?” With just weeks until voters decide, Oliver lays out the top local GOP priorities, including how he intends to reach out to independent voters.

Orange County Republicans are looking to defeat three Democratic incumbent state representatives: Joe Saunders, Karen Castor Dentel and Linda Stewart. They are also focusing on electing Bryan Nelson to the Orange County Commission against Democrat Alvin Moore. But Lew Oliver also makes it clear that the Republicans do not want voters knowing their party affiliation in local elections, using six exclamation marks to emphasize the need to “STOP QUESTION C!!!!!!” (his emphasis, not mine). The ballot measure would make all Orange County Charter offices partisan and would move all County Charter office elections to 2016, shortening the upcoming term of Republican Mayor Teresa Jacobs.

These priorities and races will now define the battleground between Republicans and Democrats in 2014 locally and the results will define which party is successful in November.

According to the Supervisor of Elections, the Republican Party continues to diminish in Orange County, with 205,546 registered Republican voters. That compares to 303,495 registered Democratic voters and 169,673 voters registered as “no party affiliation.” This could be one reason why Question C is a top priority. So how will the local GOP reach out to NPA voters in 2014?

“One of the most effective ways to influence ballot questions – especially with independents – is with yard signs,” Lew Oliver states in his email. “We have 10,000 yard signs coming next week. We need to SATURATE the county with these. It’s a lot of work. It’s SO important that I cannot risk this to just volunteers. I am willing to PAY people to put up signs.”

Sure goes against that whole “yard signs don’t vote” mentality in politics, doesn’t it?

The local GOP will also pay $10/hour “to have people at early voting sites handing out literature to independents and republicans and to ‘guard’ signs and hold other signs.”

Oliver admits “the county is too big to be able to reasonably rely on volunteers for all of this.” It would be a major defeat to local Democrats if the Republicans are able to elect candidates Bob Cortes in District 30 (against Karen Castor Dentel), Rene “Coach P” Plasencia in District 49 (against Joe Saunders), Mike Miller in District 47 (against Linda Stewart) or former state representative Bryan  Nelson to the County Commission (against Alvin Moore).

Outside of “conventional” activities like calling, walking door-to-door and mailing voters, Oliver also admits the elections this year are “too important” to rely solely on volunteers. This strategy of paid political work has been heavily adopted by local Democrats and their allies as well, who regularly pay canvassers and phone bankers to reach critical voters or collect petitions, like in the case of Question C.

“There is always some hesitation to offer pay for something that IN THEORY should and could be done by volunteers, but winning these critical elections is too important; we cannot risk being short of critical manpower if we have the resources to pay for it,” the GOP email concludes.