You are here: Home › City of Orlando › Another $5+ Million Down the Drain with Parramore Retention Pond Waste 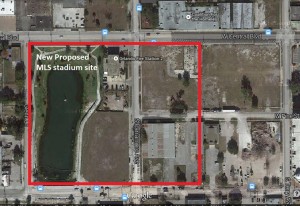 The true cost to taxpayers for the City of Orlando’s abrupt decision to move the location of the new proposed Major League Soccer stadium is slowly becoming more clear based on new public records. With Mayor Buddy Dyer’s sudden change in plans, part of the new soccer stadium will sit on top of the North Parramore Retention Pond (“North Pond”). But the City of Orlando just finished spending more than $5 million to build the North Pond – and now the Mayor wants to get rid of it.

However, the North Pond required “emergency” rapid response work done to the site in 2012, which included construction of a retaining wall. That project cost $646,039.95 and was invoiced June 18, 2012 according to the City of Orlando Capital Improvement and Infrastructure Division.

That means the North Parramore Retention Pond project cost a total of $5,483,395.29. It was also necessary due to the development in the area and will need to be replaced at a costly expense to the city. With the disclosure of contamination and lead, it seems like there were other purposes for digging so deep than just stormwater drainage.

Dyer’s hasty decision is going to result in more waste regarding the North Parramore Retention Pond at a time our City can’t afford it. These are all additional costs being absorbed by the City for the future MLS soccer team as well. The handouts continue – why isn’t the team covering the costs? This is just one piece of the expenses related to the reckless decision by Mayor Dyer to move the soccer stadium location. Stay tuned, and keep the taxpayers’ tab open.