You are here: Home › City of Orlando › Dyer Budget Cuts: One Department’s Example of the Impact of Orlando’s Fiscal Crisis 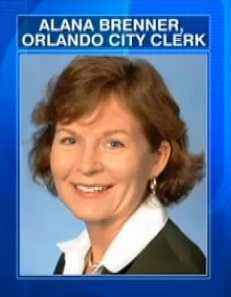 As many residents continue trying to come to terms with the Orlando City Council’s new 17.7% property tax increase, there is a larger impact to Mayor Buddy Dyer’s $52 million budget crisis still to be felt. When Mayor Dyer and the Council gave preliminary approval to the huge tax increase, they also approved cuts that will impact every City department as well as the public services City Hall provides.

While it has been very difficult to get specific information from the City of Orlando on the full itemized budget and proposed cuts, one city department provides an example of the impact that is going to be realized from Dyer’s budget cuts this year. How bad must it be in the Dyer administration if the City Clerk sent an email stating (emphasis mine), “So you are now saying we need to cut those amounts from our budgets for those two offices? Really?? That’s two staff people…or we don’t print the legal ads for ordinances.”

“Or we don’t print the legal ads for ordinances.” Wow.

City Clerk Alana Brenner is very close with Mayor Dyer and the Clerk’s office is supposed to provide “accountability and stewardship for the City’s public records, documents and ordinances in response to the needs of citizens, Council and City departments” according to the City. Brenner’s office also handles the city elections and every public records request. Her own emails help illustrate what each department is going through and show the confusion throughout City Hall about how much must be cut and what formula is deciding what gets cut.

The “across-the-board” 4.5% budget cut seems more of a talking point than a reality. In fact, it also appears that many within the Dyer administration were not exactly sure about what amount was to be cut. In one email exchange, City Clerk Brenner writes the administrative specialist to Dyer’s Chief of Staff questioning a 2.83% cut, or $25,423. Brenner says she’s “not sure” where she will be able to cut $25,000 as she assumed the cuts were going to be “handled” by not filling an employee position. 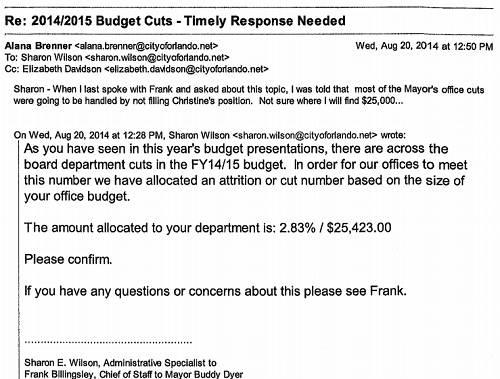 In a response, the Chief of Staff’s office sends City Clerk Brenner a new percentage of cuts, as “there must have been a hidden formula” and the cuts were actually larger than the previous message stated. Alana Brenner was told she would need to cut 4.14% from the Clerk’s budget, or $37,141, and 1.82% from the Records Management budget, or $16,296. This is where the City Clerk questions the amounts with “Really??” and brings up being able to afford printing legal ads for city ordinances. 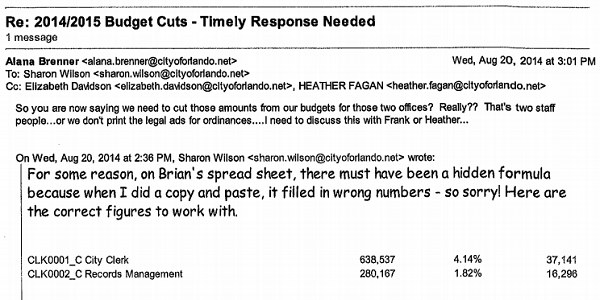 It’s unclear if the City Clerk was able to discuss the cuts directly with Chief of Staff Frank Billingsley or Deputy Chief of Staff Heather Fagan. But the administrative specialist wrote back quickly:

Then, new numbers arrived regarding the budget cuts! These numbers came directly from Frank Billingsley and state the City Clerk’s office must cut $38,512 and Records Management must cut $16,008. Not that anyone is confused at City Hall. 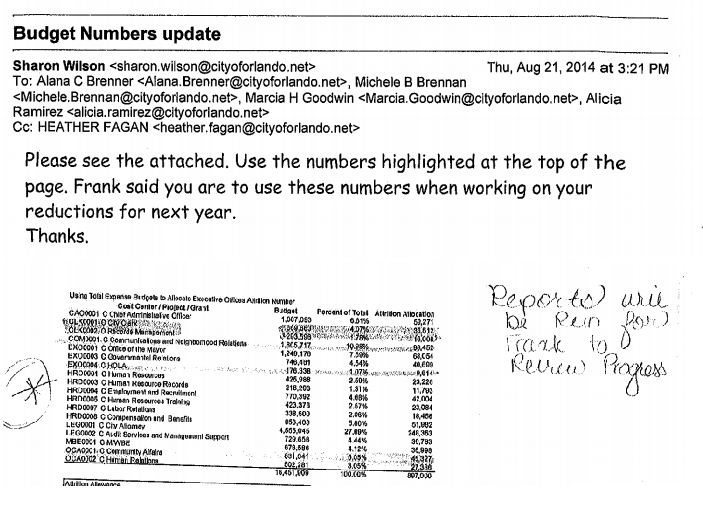 The next day, City Clerk Brenner didn’t put up any more of a fight and forwarded her suggested reductions. They include cutting $20,000 from “seasonal employees” and reducing operating costs by $8,000. Supplies will be cut an additional $8,000 and the Clerk’s office will cut around $2,500 from “contractual services” for a total of $38,512. Records Management will cut contractual services from over $10,000 in the current budget to $2,500 and will eliminate $8,000 from supplies, lowering the budget for supplies to just $1,991 for Fiscal Year 2014/2015.

So what are the other departments proposing for their cuts? Records requests are still currently outstanding…

Orlando’s finances are in even more trouble as Mayor Dyer’s loan debt for paying for the Venues and other obligations is coming due. It would not be surprising if these budget cuts – and possible future cuts – will also mean loss of jobs in addition to lost public services. The mess continues.